In the fifteenth year of the reign of Emperor Tiberius, when Pontius Pilate was governor of Judea, and Herod was ruler of Galilee, and his brother Philip ruler of the region of Ituraea and Trachonitis, and Lysanias ruler of Abilene, during the high priesthood of Annas and Caiaphas, the word of God came to John son of Zechariah in the wilderness. He went into all the region around the Jordan, proclaiming a baptism of repentance for the forgiveness of sins, as it is written in the book of the words of the prophet Isaiah, “The voice of one crying out in the wilderness: ‘Prepare the way of the Lord, make his paths straight. Every valley shall be filled, and every mountain and hill shall be made low, and the crooked shall be made straight, and the rough ways made smooth; and all flesh shall see the salvation of God.’” (Luke 3:1-6)
A week into the COP21 climate talks in Paris, it is too early to tell whether a strong enough agreement will result from these meetings. We hope for a just agreement that is strong enough to mitigate global warming sufficiently to avert catastrophe and not just delay it. People who understand the importance of these talks are eager for news in the days ahead.
Although what the world’s leaders do with this opportunity will probably be what we remember most about 2015 in the years ahead, our news in the United States this week has been dominated by other stories. More gun violence, related concerns about both foreign and domestic terrorism, and coverage of presidential candidates seemed to predominate. Even with the effects of climate change exacerbating the conditions that allow terrorism to take hold, some American politicians and pundits have suggested that it is wrong to give the climate conference any sort of priority if we face any other sort of threat.
A great flaw in such thinking is that we can separate environmental issues from other issues. The failure to realize the interconnections within the web that sustains all life on this planet is what has gotten us to this critical last hour attempt to negotiate an agreement that might avert a global catastrophe. A similar failure, the failure to recognize the interconnections among various “issues”, is one of the greatest political obstacles to success.
Despite the increasingly obvious human toll of climate change, we have a habit of thought left over from the

twentieth century that continues to make concern for the environment a side issue. That leftover way of thinking separates concern for humankind from concern for the earth. A pinched perspective on life, perhaps a legacy of the Great Depression, gave us a sense in the last century that we could — and probably should — be concerned primarily for humankind without being concerned about the rest of creation. Given the false choice between concern for people and concern for “nature”, we chose concern for human welfare over concern for the great outdoors. (The latter, after all, would always be waiting for us when we wanted to take a break.) We developed a false dichotomy between human welfare and the welfare of other living things that not only was an intellectual error, but has resulted in the biggest threat ever to human beings around the world. Many of our politicians and pundits continue this error.

This week’s Advent Gospel (Luke 3:1-6) turns to John the Baptist proclaiming a “baptism of repentance”.  John the Baptist isn’t calling for a simple confession of our sins or a change in government policies. He is calling for a deep, life-changing reorientation of our souls that results in righteousness, in lives aligned with God’s ways, not the ways of the marketplace or the political forum. Such a reorientation of our souls results in a strong grounding in reality, an immersion that restores our sense of wonder and our awareness of the interconnections among things. This restoration reveals the fallacies in the ways of thinking we are offered by so many of the loudest voices in our nation.
Luke begins today’s Gospel passage with references to various political and religious leaders in order to set the events he is describing in history, to pin down the year when John began preaching. Yet we pay much more attention today to the words of John than we do to anything the people considered “historical figures” said or did. What endures today isn’t so much what the rulers thought or did; those loud voices of their time aren’t the ones that echo down through the centuries to the Church today. What is important to us as the second week of Advent begins is the single voice of John the Baptist in the wilderness.
We are preparing ourselves to once again bear witness to the Incarnation, to God becoming human, bridging the divide between heaven and earth and showing that divide to be less real than we had thought. One way to prepare ourselves for that Christmas witness is to learn to think past the paradigms and categories the loud voices of our time would have us accept as real. 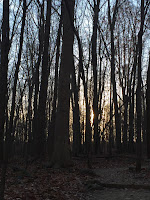 Everything is connected. Interpersonal violence in our homes and communities is connected to violence between competing factions within nations. These forms of violence are connected to violence between nations and violence to the biosphere. Violence to our biosphere results in droughts, floods, famine, and rising seas that produce refugees who need to go somewhere. Violence to our biosphere results in lack of access to food and water and living space that easily results in conflict. Everything is of one piece. A nation or world that solves problems at the point of a gun will never be able to restore a sustainable biosphere.
Repent. Say no to the false choices we are offered. Refuse to listen to the loudest voices. Instead, listen to the quieter voices that call us to peace and restoration. Listen to the voices that matter in the long-term, the ones that prepare us to better hear and follow Jesus, the one who taught us to love of God and love our neighbors.
– Archdeacon Betsy Blake Bennett
Follow Betsy’s blog at http://nebraskagreensprouts.blogspot.com